Layout of the start page of a manual

a) Tiles and introduction Text 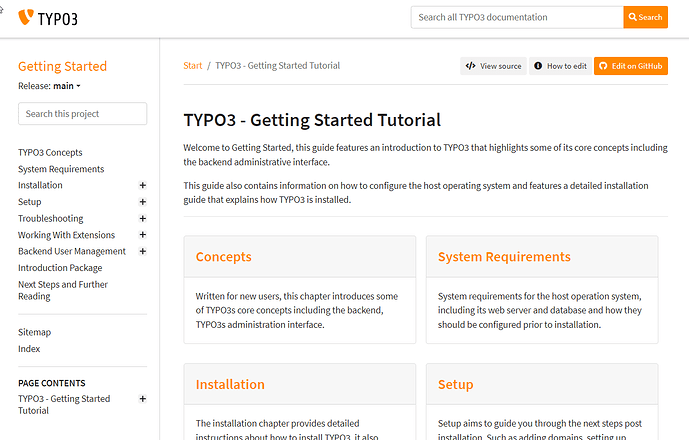 c) Table on top, tiles below

Combining the two, @jiriki put his part on top and toms part below instead of the doctree menu:

d) Tiles on top, table below

Which solution shall we use?

So, I am fine with version d (for “official” manuals) as it has the best value for the average user.

I think it is hard to say at this point in general. I like the tiles but what do we do in TYPO3 Explained which a huge list of items - having an explanation for them would be nice but you have to scroll a lot more. So, in general I would prefer the tiles - not just because of the optics, but also for the description, but not for long lists which may be better structured as hierarchical bullet lists.

I already wrote before, that I find most of that redundant: version already available in version selector. “Rendered” - can already be seen in footer and only really relevant for admins. License - used to also be in footer. But not all of it.

I also think version, language and last rendered are redundant. License would belong in the footer as it applies to all pages not just the start page

What we currently use in most manuals is (b). That’s dozens of official manuals and hundreds of third-party manuals.

Introducing a second official layout with tiles instead of the table of contents is fine in my opinion, but we should point out when we want to use which one. My opinion on this is:

The second decision relates to metadata: I echo Sybille: “The metadata […] down there looks a bit weird to me.”. It looks like a programmer solved a UX problem on-the-fly. My opinion on metadata is:

+1 on removing the metadata.

I’m okay with the tiles, but they don’t work for long lists (like in TYPO3 Explained). Could we have a rule? 6 tiles is okay, but >6 use with a bullet list. I’m not sold on that.

I’m not sure what the answer is here.

I also prefer solution a) and support removing the meta data from the start page.